Forum of Partecipation 2.0: The European ICOMOS Presidents Round Table

The main European Presidents of ICOMOS – International Council of Monuments and Sites, in its role as a consultant to UNESCO, met at a round table on October 15th at the Forum of Participation 2.0 held at Fortezza Da Basso in Florence for the implementation of the United Nations’ 2030 Sustainable Cities and Communities.

The Round Table will discuss these issues:
• UNESCO World Heritage Convention: history of success or crisis of its values?
• The status of ICOMOS in each country and the perspectives towards AG2019 and SDGS 2030
• The European Heritage Year 2018 and ICOMOS
• Young Professional and ICOMOS 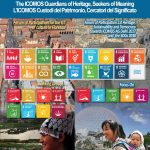 The ICOMOS Guardians of Heritage, Seekers of Meaning: Forum of Participation 2.0: Heritage, Sustainability and Democracy towards ICOMOS AG Delhi 2017 and the SDGs 2030Internationals 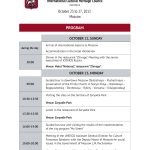