Our cities are likely to sink into a swamp of polluted water.

To prove this is also the case of the new Milanese town of S.Giulia, seized for pollution of the fence. Under the Lombard capital, the water catchment rises at the rate of … cm per year, and particularly in the area of ​​the S. Giulia district, the rise in water level was 2 meters from 2000 to today.

“The fate of many urban centers is to be submerged by dirty water. Modern cities are water concentration machines that are polluted and often stagnant without being cleaned or disposed of. This is the case in Milan, where the traditional water management system based on Navigli and the Fountains was destroyed in the industrial era. Today, with the disappearance of the manufacturing sector from the urban area, industrial water consumption has collapsed and the groundwater is flooded with polluted water. ” To say it is Pietro Laureano, president of ITKI, the International Institute for Traditional Knowledge born in Florence last May under the aegis of Unesco.

The rise of the aquifers threatens to flood the wineries and the Milan motorways, but “this time, in Santa Giulia, the ecological bomb of the former Montedison area has been uncovered, with its load of carcinogenic pollutants on which The Montecity model neighborhood wanted to be created by real estate designer Zunino. In that area, in addition to the polluting load, the groundwater is rising at a sustained pace, so much so that in the new town project of the southern suburbs, there were plans for the construction of heat pump plants based on the rise of the roof: a good Renewable energy based this time on an ecological problem. ”

But that of Milan is not an isolated experience. These are phenomena – notes the ITKI manager – that are found in different parts of the world. “Paradoxically, some of the most obvious water-borne experiences in urban centers are found in the oases of the Sahara, for example in the towns of Ouargà in Algeria and in the small conglomerate of the Souf, between Algeria and Tunisia. In the desert, where water is meticulously handled, the water concentration in the cities gives rise to the ravage of the area. It goes without saying that the palms die, semi-submerged by unhealthy waters, filled with pollutants and salts, because the water attracted and polluted by the city is too much and can not be absorbed by the desert environment. ” Thus, Las Vegas traps and gets dirty, dispersing them in wetlands, much of Colorado’s waters, which no longer arrive at sea.

Traditional techniques, along with remediation technologies, can make an important contribution to solving the problem. “Where cities absorb large amounts of water, often very simple arrangements are needed to restore it to the surrounding environment. Once the flock of Milan – Laureano explains – was handled in a natural way by the non-channeled Navigli and the abundance of water was redistributed to the inhabitants by traditional fountains. Today we need to think of the most natural methods of reclaiming polluted waters and return them to agricultural areas, for example. What has happened in some areas of Delhi, India, where water used for health uses are filtered through traditional and redistributed rice paddies. In fact, this is the closing of the circle: we throw away the water enriched with natural nutrients, such as the waste of the cities, making them come directly to the sea, where they cause eutrophication. Instead, we grew our fields with chemical fertilizers, the same products from the Montedison plant that caused the ecological bomb of S. Giulia. ” Traditional techniques are a method of restoring the territory and not a response to the emergency: for this reason ITKI is born to realize the global archive of local knowledge that can provide a huge contribution to the solution of the global environmental crisis. 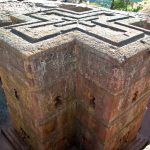 Lalibela, the Ethiopian city famous for the monolithic monuments all excavated in basaltPress Releases