The current economic crisis is not a mere financial crisis, it is the symptom of the unsustainability of a model based on waste and the depletion of resources. Model that has led to the depletion and collapse of planetary ecosystems. In this global crisis, climate climatic phenomena in place due to climate warming trigger catastrophes and increase risk factors. But climate change and collapse of civilizations are not new phenomena in history. Peoples have always faced the unpredictability and the environment, and climate variability and response to these problems have determined the success or the end of the society. Environmental conditions have forged over time local knowledge capable of responding to adversity with appropriate techniques of water capture and distribution, soil protection, recycling and optimum energy use. These techniques form an extraordinary reservoir of sustainable knowledge. However, it is the first time in the history of the planet that climate change occurs because of human intervention and is accompanied by two factors that make it difficult to answer. The first factor is the time. The speed of triggered processes prevents the gradual natural and cultural adaptation that allowed progressive adaptation to new conditions. The second factor is the state of degradation of physical and social conditions. Soils are exhausted by industrial agriculture and massive urbanization. Cultures are emptied of emigration, poverty, and loss of identity.

Industrial agriculture has produced large areas for monoculture and supported by irrigation and artificial fertilization, herbicides and pesticides. It has so destroyed that mosaic landscape made of terraces, dry walls, cultivated varieties, tree rows, drainage that protected soil protection and water retention. Urbanization has emptied the mountainous areas by eliminating human gaps in erosion and determined large cemented surfaces on the coasts and plains preventing water absorption into the bogies. Climate extremes thus have a devastating effect, triggering physical and cultural desertification. The drama concerns all the countries of the world both arid and temperate airs. However, where resources are rare and water is not humanity learned how to handle it wisely like in the oases of the desert. Oases are not natural phenomena, the fruit of the case, but the product of human ingenuity. Palm trees, raw earth constructions, hydraulic systems, the same large sand dunes are built and appropriately used by the inhabitants to maintain a livable environment in one of the most inclement weather on the planet. Every single palm tree is planted and cured, fertilized with organic waste, it is irrigated with waters administered jealously, sometimes captured by imposing tunnels that collect every drop of moisture from the sands. Thus the shadow is formed and the vapor condenses and, protected from the sun and the wind, multiply the microorganisms and other biological elements that make up the fertile soil, humus. There is a virtuous interaction of factors that can trigger positive dynamics in contrast to the harsh and hostile situation. It is determined by a microcosm in which life and thought are linked to places, to other living beings, and to everything. A closely connected system entrusted entirely to the care of the inhabitants. The state of the oasis, where every mistake immediately affects the survival of the entire ecosystem, is a teaching for our landscape and for our historical centers that are stone oasis made in harmony with environmental conditions. To protect them, it is necessary to respect the ways and techniques appropriate to places transmitted over time through the identity of communities to develop the awareness that only a common and responsible management can ensure the survival of the oasis in the cosmos that is called Earth. 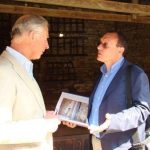 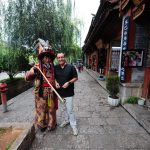 Kunming, China. Appeal of Pietro Laureano at the XVI Congress of the World Union of Anthropologists against the exodus from historical centers and the destruction of nomadic and Oasian culturesPress Releases