Participation Forum for the G7 of the culture of Florence: Heritage and Sustainability in the SDGs 2030

In conjunction with the G7 Italy of Culture in Florence, ICOMOS in its advisory role with UNESCO, together with other relevant bodies, ICCROM and UICN, meets on March 30 and 31 in the whole of the SS. Experts, mayors, administrations, protection associations and civil society have been announced in Florence for the implementation of the 2030 United Nations Objective on Sustainable Cities and Communities. The aims are the communication and the strengthening of ICOMOS Italy, concrete actions for the protection of the areas at risk and to face the global climatic, hydrogeological and migratory crises giving responsibility and legitimacy to the safeguard associations and communities.

The UNESCO World Heritage Convention (United Nations Organization for Education, Science and Culture) launched in 1972 is responsible for the creation of a list of monuments and sites of great value for the whole of humanity. Entry into the world of wonders is today one of the most coveted awards, a sure mark of visibility and success. In 2017 we have 1054 sites registered in 164 countries. Italy with 51 entries is the country with the most sites in the world. UNESCO is an intergovernmental, state-dependent organization founded in 1965 by a body of independent experts: ICOMOS, the International Council of Monuments and Sites, with headquarters in Paris divided into National Committees. The current world president is Gustavo Araoz of the United States, the world vice president is Toshiyuki Kono Japan, The new president of the Italian National Committee is Pietro Laureano.

ICOMOS is a body of excellence of top professionals and experts with inputs on selection but not for this reason not open to young people and new skills. Today ICOMOS with 9,500 members in 144 countries, 110 national committees and 27 international scientific committees is the world’s largest non-governmental organization for cultural heritage and the only body for UNESCO monuments and sites and both tangible and intangible heritage.

The conference responds to the United Nations goal for 2030 on Sustainable Cities and Communities where for the first time the Heritage is included among the international strategic priorities and ICOMOS is assigned the task of implementing it through a participatory procedure from the bottom up high involving local communities. The new vision is to overcome the monumental approach to Heritage by affirming the centrality of the peoples who made it and their role in management and participation. The conference will consist of working groups to implement good practices. Agreements will be signed between associations and institutions to give legitimacy and voice to the enormous wealth of associations and to start concrete actions in the cities and communities affected by the earthquake and in the areas at risk. A model based on inclusiveness, maintenance, the beauty of the landscape, the health of nutrition, complete traceability, recycling, local knowledge and self-enhancement is proposed, placing human values ​​first. In the affected areas, the paradigm shift is not to separate immediate intervention from environmental and social compatibility by immediately supplying homes, even DIY, but which save water and energy and have urban quality. Recovery must avoid fierce restorations and embellishments and encourage re-use already from safety measures by allocating the sums of the finishes to the populations in reception, education and work.

The most important Italian organizations and associations of protection will be present, including WWF, Slow Food, Lega Ambiente, Lipu, Italia Nostra, UNISG University of Gastronomic Sciences of Pollenzo. A participation charter will be launched and agreements signed between the organizations for the purpose of coordinating protection actions.

In the cloister of the SS. Annunziata will be exposed to a section of a bio-mimetic, modular, assemblable house, even DIY, supplied with water and energy-saving devices. The fractal geometry of the structure reacts in a differentiated and flexible way to mechanical stresses resulting in anti seismic and meteorological ones acting as a climatic balance. The proposal is from ITKI (International Institute of Traditional Knowledge) designed by Pietro Laureano who for IPOGEA, on behalf of the Ministry of Culture of Abu Dhabi, has already implemented the solution in the Al Ain oasis. The realization is by Ton Grupe in bio architecture materials such as wood, hemp and raw earth. In one of the structures, the Italian Traditional Espresso Coffee Consortium, a candidate for inclusion in the list of UNESCO Intangible Heritage and General Sponsor of the meeting, will exhibit vintage coffee machines and will set up a free tasting coffee shop. According to the agreement that will be signed between ICOMOS, the Gran Sasso Laga National Park, the Municipality of Isola della Scala, Diotima, CSE Idea Ton Grupe, IPOGEA, ITKI, a home prototype and a mobile café for the situations affected will be given as a gift to the earthquake areas.

At the end of the event a choir of 1484 will be exhibited. The illuminated codex has not been shown to the public since the Napoleonic era. The guests will be seated in the semi-circular choir, in front of the large organ that acts as a backdrop and the cabinet with the lectern that rotates. Further down, a high quality handcrafted reproduction will be arranged by the Mariani Ambassador Institute, so that it is possible to browse through a few pages and observe the decorations in greater detail. A piece of sacred music will be performed by a chorus of voices. 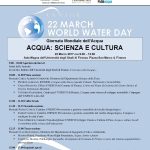 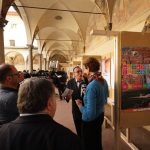 ICOMOS Custodians of the Heritage, Seekers of Meaning: Participation Forum for the G7 of the culture of Florence: Heritage and Sustainability in the SDGs 2030Comunicati Stampa